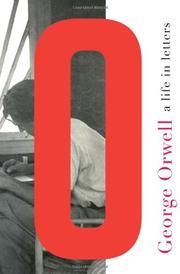 A Life in Letters

A representative selection, culled from the 20-volume Complete Works, which Davison co-edited, of correspondence by and to 20th-century England’s fiercest literary opponent of totalitarianism.

There are very few letters from the childhood of Eric Blair (Orwell’s real name) and none from the years as an imperial policeman in Burma that formed his anticolonial and socialist views; the collection really begins in 1934, not long after the publication of Down and Out in Paris and London introduced the 31-year-old author under the pen name George Orwell. Most are by Orwell himself, but gaps in the historical record are filled by correspondence from others. The letters of his first wife, Eileen O’Shaughnessy, are particularly valuable; livelier and much more personal than the author’s, they give intimate glimpses of the couple’s home life and sometimes-fraught relationship. Their warmth makes palpable the awful loss inflicted by 39-year-old Eileen’s death during surgery in 1945, a trauma only hinted at in Orwell’s dignified, reticent account of the event. In general, he is a brisk, businesslike correspondent; among the few exceptions are affectionate references to his adopted son and a few emotional 1946 letters to his London neighbor Anne Popham, which add some nuance to the 2007 controversy over charges that Orwell’s wooing style was aggressively close to rape. Readers seeking insights into the creation of Animal Farm or 1984 will find only a few scattered sentences, and nonfiction, such as The Road to Wigan Pier, is similarly referred to mostly in passing. The correspondence does convey Orwell’s strong, principled political positions, especially his revulsion against fellow leftists who “set up a double standard of political morality, one for the U.S.S.R. and the other for the rest of the world.” Grim letters chronicling the worsening tuberculosis that killed him remind us how prematurely we lost this ardent voice for a single standard of truthfulness and common decency.