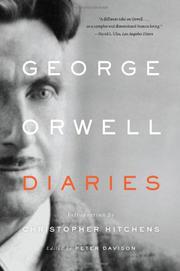 A co-editor of George Orwell’s Complete Works offers a lushly annotated edition of Orwell’s diaries from 1931 to 1949.

Born Eric Arthur Blair, Orwell, as these diaries reveal, lived a varied and even dichotomized life. A reader who visited the majority of these pages could never guess that they recorded the activities of the author of Animal Farm, Keep the Aspidistra Flying and 1984, a book he completed while suffering from the tuberculosis that would kill him. (Among the most poignant pages here are Orwell’s lists of his hospital routines just weeks before he died.) Many of the author’s entries deal with his activities on his farm. We learn how many eggs his hens laid each day, his battles with hungry rabbits and deer, his killing of the occasional snake, his observations of the weather, and his maintenance of the property. One moment of great excitement was his near-death in a whirlpool in the Gulf of Corryvreckran. Earlier sections of the diary deal with his abject poverty in the 1930s. He traveled around picking hops (a process he describes in some detail); he was down and out in Paris and London; he traveled to the Mediterranean. In all these places, he noted human customs and flora and fauna. In 1939, Orwell kept daily track of events that were leading toward world war but interwove odd moments about earwigs, a dead cat and the properties of goat manure. In the diary he kept during World War II, he found himself becoming accustomed to continual bombing in London. He joined the Home Guard but noted that their rickety weapons would hardly retard the expected German invasion.