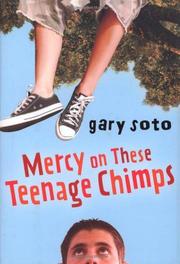 MERCY ON THESE TEENAGE CHIMPS

This lighthearted, off-beat slice of life focuses on two (barely) teenaged boys. Narrated by 13-year-old Ronnie Gonzalez, the story revolves around his pal Joey’s retreat to a tree after being humiliated in front of his first crush. Ronnie’s efforts to track down the object of Joey’s affection and bring the two together make up the bulk of the story that takes place over a weekend. Whether trying to help out the gruff coach from his school who is having marital problems or sympathizing with his hardworking mom, Ronnie has an engaging personality and a good heart. Without including any utterly unlikely events, Soto gives his story a touch of the fantastic that will appeal to young readers caught up in the angst of their own growing pains. The fact that both boys are Hispanic adds flavor to the tale without limiting its universal appeal. Some readers may tire of the extended comparison between teen boys and chimpanzees, but that’s not to say that it doesn’t have some merit. Breezy and entertaining. (Fiction. 11-14)