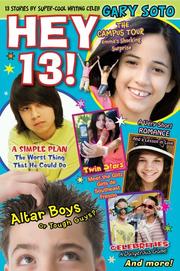 An inexperienced middle-school honor student’s eye-opening visit to a liberal-arts college starts the collection, and a far less naïve young girl has an equally revealing visit to a friend’s house in the 13th and final tale. In between, subjects range from the superficial to the profound, mimicking the life of the average 13-year-old. In “Twin Stars,” best friends Teri and Luz dream of pop stardom, while Saul Garcia faces a crisis of conscience when he abandons his faithful dog in “A Simple Plan.” Cynthia Rodriguez struggles with the issues of poverty and charity after serving a classmate at a local soup kitchen in “Finding Religion.” Also realistically, not all of the tales feature epiphanies. Sometimes the bullies do win, and occasionally self-absorbed teenaged girls stay that way. While the collection offers a mixture of male (four) and female (nine) protagonists who are often explicitly Latino, the cover of the book features pictures of primarily young Latinas and resembles the type of teen fan magazine marketed exclusively at girls. This stylistic decision is unfortunate, as there are some gems for both genders in the collection. If young males can get past the cover, this collection is good for all reluctant readers. (Short stories. 10-13)