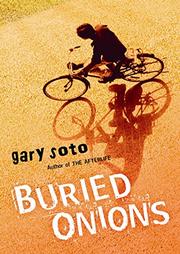 Eddie, a young Mexican-American scraping by in the mean streets of Fresno, California, counts four dead relatives and one dead friend in the opening, in-your-face lines of this new novel from Soto (Snapshots from the Wedding, p. 228, etc.). In bleak sentences of whispered beauty, Eddie tells how he dropped out of vocational college and is attempting to get by with odd jobs. His aunt and friends want him to avenge the recent murder of his cousin, but Eddie just wants to find a way out. Everything he tries turns soura stint doing yard work ends when his boss's truck is stolen on Eddie's watchand life is a daily battle for survival. This unrelenting portrait is unsparing in squalid details: The glue sniffers, gangs, bums, casual knifings, filth, and stench are in the forefront of a life without much hope``Laundry wept from the lines, the faded flags of poor, ignorant, unemployable people.'' Soto plays the tale straightthe only sign of a ``happy'' ending is in Eddie's joining the Navy. The result is a sort of Fresno Salaam Bombay without the pockets of humanity that gave the original its charm. A valuable tale, it's one that makes no concessions. (glossary) (Fiction. 12-14)