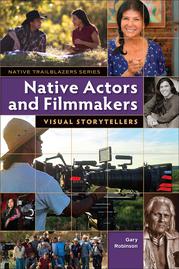 Each chapter in this collective biography is a self-contained profile that sparks interest in Native people working in the entertainment industry.

Readers will explore Native American, First Nation, and Indigenous actors, filmmakers, and more from the United States and Canada. Each minibiography describes the individual’s early childhood and professional career and closes with a selected filmography. Direct quotes from the subjects help enliven their stories. Readers will encounter personal anecdotes, like Indigenous Mexican American cinematographer Gilbert Salas’ memory of watching a movie with his mother when his grandmother thought they were at church. Actor Tantoo Cardinal (Métis, Cree, Dene, and Nakota), who has appeared in more than 120 productions, talks about using her acting to tell “the truth of our Indigenous history, because so many lies had been told about us.” The book also looks at television shows and commercials, such as the “Grandma Running” New Balance commercial created by Christopher Nataanii Cegielski (Diné), inspired by elderly women he had observed dancing at powwows in athletic shoes. The wide range of roles covered informs readers about the industry and Native creatives’ work both in front of and behind the camera. This slim volume is a jumping-off point for those wishing to learn more, and it includes a list of resources pointing readers to additional information about the film industry and Native cinema-related organizations and events.

A collection of familiar faces and nostalgic voices representing Native contributions to film.