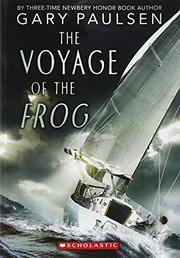 THE VOYAGE OF THE FROG

Another tautly written survival story, much like Hatchet (1987, Newbery Honor Book) in design, though not in incident. David, 14, has just inherited Frog, a 22-foot sailboat, from his well-loved uncle and companion, Owen, dead of a cruelly swift cancer. Mourning, David is scattering Owen's ashes, alone and out of sight of the southern California coast (Owen's last request) when he is caught by a sudden storm and knocked out by the boom. After a series of adventures that gradually makes him more competent and confident—a becalming, a shark, an oil tanker that nearly collides with him, looming but friendly whales, another storm—he encounters a research ship and accepts some supplies, but decides to make his way home alone (350 miles against wind and current) rather than abandon the untowable Frog. Though David encounters plenty of life-threatening situations, there's never real doubt that he will survive; what holds attention here is the way he applies his ability to reason in coping with physical challenges and his own tear. As he acquires Owen's intimacy with Frog and sea, David also begins to assume Owen's best traits: his thirst for knowledge, his respect for the natural world. Like the adults in Hatchet, David's parents and Owen remain shadowy figures, within the range of the possible (though few parents would willingly allow a boy to undertake such a journey), but that is beside the point: this story is about the voyage of the Frog—an epic, often lyrical journey of self-discovery, perhaps less gripping than Hatchet but with a subtler, more penetrating delineation of its protagonist.