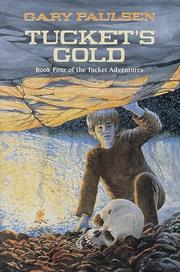 The fourth installment of Paulsen’s Tucket Adventures (Tucket’s Ride, 1997, etc.) is instantly involving, with plotting that rockets along. Francis Tucket, 15, and his two young charges, the talkative Lottie and her little brother, Billy, are on the run, one step ahead of the ruthless Comancheros, “the dirt-meanest men Francis had ever seen in a world full of mean men.” The children are valuable commodities on the frontier, easily “sold or traded into slavery.” As the youngsters flee, they battle the elements, find a treasure, meet up with a tribe of friendly Pueblo Indians, and are captured by a pair of pitiless thieves. The book is bursting with clearly limned, colorful characters and despite his lightning pace, Paulsen finds time for softer moments as well. Francis, for example, who hasn’t seen his kin since he was stolen by the Pawnee, realizes that he loves Lottie and Billy, and that they “were more of a family to him than the one he’d lost.” This invigorating story is just right for readers who like their action at a gallop. (Fiction. 9-12)