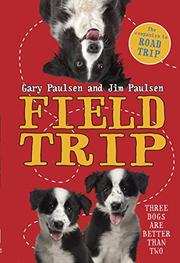 A boy, a dad, two dogs, and a much-needed field trip.

As in Road Trip (2013), Ben sets out on a journey with his dad. Ben plans to convince his father of his critical need to attend a new ice hockey academy. His dad may have other plans, however. They're accompanied by quite a crew: Atticus, the family's aging but wise border collie, who just wants to keep his flock of people together; Conor, their exuberant puppy; Brig, an always-hungry house-renovating apprentice; and twins Jacob and Charlotte, who are Ben's classmates. The supposed purpose of the expedition is to catch up with the rest of the class, which is on an extended field trip. Nothing ever works out the way it's planned, however, and the oft-silly action teeters on the brink of farce, as Ben tries to wangle an unscheduled hockey academy tryout, the twins attempt to broaden their educational horizons, Brig eats yet another strange concoction, and Atticus and Conor offer their own takes on the evolving situation. The Paulsens travel familiar ground; their first outing felt fresh, but this reads like something of a retread: gather some amusingly depicted, offbeat characters in a vehicle, add some father-son conflict, and take them on a bumpy ride.

Readers who enjoyed the first will want to share this trip as well, but fresh ideas are needed if there's to be a third journey.