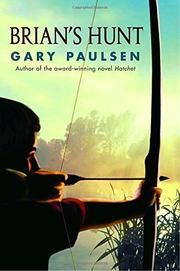 Brian Robeson has returned to the Canadian wilderness, where his plane crashed two years before. Now 18, he feels he’s in his element, a perfect place now that he’s more seasoned. Soon, though, Brian finds a badly injured dog and two horribly mangled human bodies, and Brian the hunter becomes Brian the hunted, prey of a devilish rogue bear. The narrative is brisk, and Paulsen adds depth to Brian’s characterization through a discussion of how learning to survive in the woods led to voracious reading and a thirst to know and understand things in civilization. In an afterword, Paulsen drives home his point that bears in the wilderness are not Teddy Bears or Winnie the Pooh, that humans are part of nature and sometimes prey; it may be “lessening” or humbling, but it’s arrogant to think otherwise. Based on real incidents, this well-written sequel to Hatchet and its successors will be gobbled up by the author’s legions of fans. (Fiction. 10+)