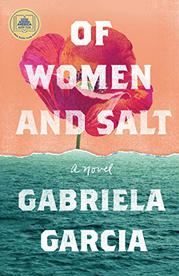 OF WOMEN AND SALT

An affluent Cuban immigrant reckons with her daughter’s drug addiction and her own culpability in their self-destructive choices.

As the book opens, it's 2018, and Carmen is writing in anguish to her daughter, Jeannette, begging her to find the will to live. Then we're immediately swept away to Camagüey, Cuba, in 1866, right before the first Cuban war for independence from Spain, where we meet one of the women's ancestors. María Isabel works at a cigar factory, and, as the war blooms bright and bloody, she's pursued by the factory’s lector, who reads newspapers and Victor Hugo novels to the workers as they roll cigars. If the novel had continued to offer rich scenes like these, it would have been a success, but from this point on, it feels haphazardly stitched together. We meet Jeannette in 2014, and then Carmen's and Jeanette’s voices alternate erratically through different time periods, with little resonance between them—both strands of the narrative center the useless or even abusive men who litter the lives of all the family’s women. Then, as if grafted onto the story, Garcia adds intermittent sections from the points of view of a woman named Gloria and her daughter, Ana, undocumented immigrants from El Salvador. Gloria is picked up by ICE agents while Ana is at a babysitter's house, and when the girl gets dropped off, Jeanette takes her in for a few nights before Carmen convinces her to call the police—a decision that will come to haunt Carmen. Even with snatches of gorgeously compelling prose, the book can't overcome the lack of relationship development among the women of the family in both Miami and Cuba.

A Cuban family grapples with violence and addiction, but their relationships lack depth.