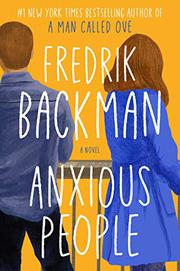 In a town in Sweden, a desperate parent turns to bank robbery to help pay the rent. Unfortunately, the target turns out to be a cashless bank, which means that no robbery can take place. In an attempt to flee the police, the would-be perpetrator runs into a nearby apartment building and interrupts an open house, causing the would-be buyers to assume they're being held hostage. After the situation has ended with an absent bank robber and blood on the carpet, a father-and-son police pair work through maddening interviews with the witnesses: the ridiculous realtor; an older couple who renovates and sells apartments in an effort to stay busy; a bickering young couple expecting their first child; a well-off woman interested only in the view from the balcony of a significant bridge in her life; an elderly woman missing her husband as New Year’s Eve approaches; and, absurdly, an actor dressed as a rabbit hired to disrupt the showing and drive down the apartment price. Backman’s latest novel focuses on how a shared event can change the course of multiple people’s lives even in times of deep and ongoing anxiousness. The observer/narrator is winding and given to tangents and, in early moments, might distract a bit too much from the strongly drawn characters. But the story gains energy and sureness as it develops, resulting in moments of insight and connection between its numerous amiable characters.

A story with both comedy and heartbreak sure to please Backman fans.