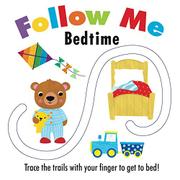 Ted, an anthropomorphic brown bear in red T-shirt, blue jeans, and sneakers, recaps his day and gets ready for bed in this interactive board book. The narration encourages little readers to trace their fingers along a path carved through each double-page spread. The story begins outside as Ted is called in by his mother, continues through the kitchen, up the stairs, into a bath, and on to bed. The paths, created by gluing painted scenes with die-cut trails onto the board pages, are deep enough that little ones will be able to trace the way with ease and cover enough ground via squiggles and turns to make it worthwhile. Each scene is accompanied by an aabb quartet that guides readers. For example, “Ted races out into the hall / He runs so fast he almost falls. / With your finger take a lot of care / to help Ted reach the top of the stairs” accompanies a path that zigzags sharply up the stairs. The busy illustrations and bright colors won’t do much to lull a child to sleep, despite the bedtime theme. Companion title Animal Faces publishes concurrently and uses the same finger-tracing technique to draw emotions on animals, such as a frown face on a “sad pig” or a furrowed brow on a “worried bear.”