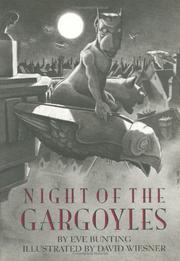 NIGHT OF THE GARGOYLES

At night a motley assortment of gargoyles come alive to "creep on stubs of feet," to fly "if they have gargoyle wings, straight up to lick the stars with long stone tongues," or to land in "sleeping trees." But eventually they all gather at a fountain to "gargoyle-hunch around the rim and gargoyle-grunt with friends from other corners who have come for company" and complain all night long about the sun, the rain (which "pours in torrents through their gaping lips and chokes their throats with autumn leaves") and—of course—the "humans who have made them so and set them high on ledges where dark pigeons go." These monsters, defined at the beginning of the book as waterspouts representing grotesque human or animal figures, come in a variety of forms—all surprisingly unsinister, despite Wiesner's gray palette. Somehow, these gargoyles appear stone-like and cuddly at the same time. Caldecott medalwinner Wiesner's charcoal drawings are as breathtaking as Bunting's prose in this wildly successful attempt to prove what we've always suspected: The gargoyle lives. (Picture book. 4-8)