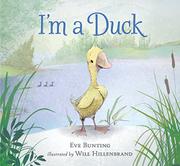 by Eve Bunting ; illustrated by Will Hillenbrand

This gentle tale about overcoming fear will comfort and encourage many a reluctant kid (or duck), which represents a fairly wide young audience: what child isn’t reluctant about something, at some point?

Told in rhyming first-person narrative, this duckling’s story starts when, as an egg, the duck-to-be rolls out of the nest and into the water, where the mother duck must come to the rescue. Now hatched, the young duck is hesitant to swim, and “a landlocked duck is very sad.” Encouraged by three brothers (the duck in question’s gender is not specified), friend Big Frog, and Owl, “who’s very wise,” the fearful young waterfowl first practices in a puddle and eventually prevails in deeper water, although with an individual take: swimming backward. Notably, the mother duck does not verbally encourage, try to teach, or chide her baby; she remains a steadfast comfort during puddle practice and lets the duckling struggle and achieve. Hillenbrand’s softly colored, mixed-media illustrations portray the pond setting in a wash of natural colors: pale yellow, soft green, and watery blue, enhancing the comforting message. The duckling itself is reminiscent of Olivier Dunrea’s Gossie and Gertie, with an innocent expression and oversized bill and an overall endearing look.

This is definitely a “message” book, but any message in such effective hands will reach its intended audience where they are