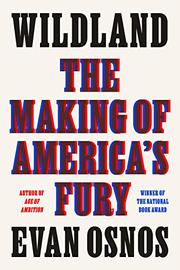 The Making of America's Fury

The National Book Award–winning journalist examines the ideological gaps that have widened between 9/11 and the Jan. 6, 2021 assault on the U.S. Capitol.

After years of reporting from China, the longtime New Yorker staffer returned to find that America had lost its gift for “the rational approach, reason, the meeting of minds in honorable agreement after open argument” that John Gunther described in his 1947 bestseller, Inside U.S.A. “If American history is a story of constant rebalancing—between greed and generosity, industry and nature, identity and assimilation—then the country had spun so far out of balance it had lost its center of gravity,” writes Osnos. He explores how it happened through stellar reporting that blends a high-altitude view of national changes with close-ups of private citizens in three places he’s lived in the U.S. Osnos is at his best in his superb portrait of Greenwich, Connecticut, where he grew up in the “Golden Triangle” that “represented the highest concentration of wealth in America” and where values shifted along with an influx of hedge fund money. Greenwich grandees once included people like Prescott Bush, the father and grandfather of future presidents, “who believed, fundamentally, in the duty of government to help people who did not enjoy his considerable advantages.” Conversely, the current generation tends to see its wealth as self-justifying and to prefer “targeted private philanthropy” to activities like serving on “local charity boards.” Osnos is slightly less insightful about Chicago, where Black residents have felt stung by the gap between their Obama-era hopes and the persistence of bigotry, and West Virginia, where predatory tactics by so-called vulture investors and others have robbed mineworkers of precious benefits. Other recent books have dealt more astutely with some of his subjects—Chris McGreal’s American Overdose with West Virginia’s opioid epidemic and John Woodrow Cox’s Children Under Fire with gun violence—but as an overview of a fractious ideological landscape, this skillful treatment is hard to beat.

An elegant survey of the causes and effects of polarization in America.