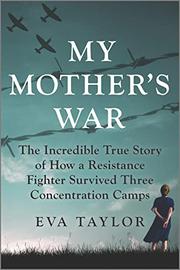 As a young woman, Taylor’s mother, Sabine Zuur, was a charming Dutch socialite who was madly in love with a pilot in the Royal Army. After her fiance left for a war from which he would never return, Sabine became involved in the Dutch resistance, helping to hide fellow resistance members in the Hague, where she lived at the time. “Sabine had an extensive and close-knit circle of friends, most of whom seemed determined to become involved with the Resistance, as was Sabine herself,” writes the author. “Like many others, she was strongly opposed to the ideals of the German Reich, and when an opportunity presented itself…to join the Resistance herself, she took it with both hands.” In 1943, Sabine was arrested and jailed in prisons in Amsterdam and Utrecht before being transferred to three different concentration camps: Amersfoort, Ravensbrück, and Mauthausen. During her time in the camps, Sabine both witnessed and endured unspeakable atrocities. She survived the final camp only because she caught the eye of a German prisoner whose chilling obsession with Sabine led him to care for her and several of her friends, including the doctor who would go on to deliver her two children when she was safely back at home in Holland. This riveting story is thoroughly researched and unsparingly frank about the cost of war. However, other than the letters she penned to her mother from two Dutch prisons, Sabine’s words are largely absent from the narrative, and the prose often lacks polish. Furthermore, Taylor defines Sabine primarly by her victimhood, providing readers with only hints of her life before the war, thereby creating a character that can feel both elusive and two-dimensional.

A heartfelt biography of a Dutch concentration camp survivor that doesn’t fully live up to its extraordinary subject.