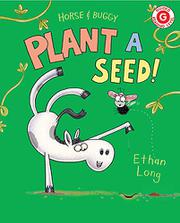 In the same vein as a popular pachyderm-and-porker pair, a cartoon horse and a sun hat–wearing horsefly engage in agricultural pursuits—with minimal props—against a flat, neon background that changes color with each page or each panel. The goal of this adventure is to plant seeds and grow vegetables (or vegetables and fruits depending on how one categorizes tomatoes, though the book does not wade into that debate). Buggy is determined to get on with the job while Horse’s high energy levels and abbreviated attention span provide comedic distractions. Befitting this very elementary early reader, the dialogue-only text that peppers the story is sparse—limited to mostly one-syllable words and a few brief sentences, the longest of which contains six words. This entry in the series, alas, is not as successful as its predecessors. The combination of incredibly spare text and frequent jumps from one conversation to the next may leave some children feeling disjointed or confused. These leaps also distract from the final joke, which stems from planting unknown seeds; its subtle buildup is at odds with the broad humor of the characters. The ultrabright backgrounds often compete with tiny Buggy and pale gray Horse, overshadowing the duo. (This book was reviewed digitally with 10-by-16-inch double-page spreads viewed at 56% of actual size.)

A less ebullient outing than usual.