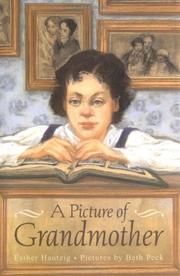 A PICTURE OF GRANDMOTHER

When Uncle Benjamin writes a letter to Sara’s mother, his sister, in Vilna inviting her and Grandmother Hanna to the 1939 World’s Fair in New York, he requests that Sara’s mother bring with her a photograph of their mother. But Sara has never seen the photograph mentioned in the letter. After searching through her mother’s things, she pays a visit to her Great-aunt Lisa who bluntly tells her that Grandmother Hanna is not really the mother of Sara’s mother, but her stepmother. Sara’s “real” grandmother, who was Great-aunt Lisa’s sister, died giving birth to Uncle Benjamin. Initially angry with Great-aunt Lisa for revealing the secret, Sara forgives her when she makes a gift to Grandmother Hanna of the brooch worn by her sister in the photograph. This bland plot fails to generate much interest for young readers and no mention is made of the imminent danger to Poland’s Jews in 1939. Black-and-white drawings lend an antique look to the text, but do little to attract an audience. (Fiction. 8-10)