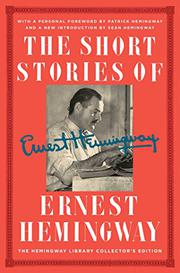 THE SHORT STORIES OF ERNEST HEMINGWAY

A gathering of some of Papa’s best—and not so best—short fiction, the genre for which he first became known and is perhaps most honored today.

Ernest Hemingway, as his grandson and editor Seán observes in his excellent introductory essay, was a newspaper reporter before all else, and he learned much from his Kansas City newspaper’s style guide, including the dicta to use short, active sentences and ledes and to “be sparing of extravagant adjectives.” Extraneous adjectives. Extra adjectives, even. In this edition, some of Hemingway’s stories are presented in a draft format, always with cuts and sometimes with additions, that illustrates the application of these rules: “One hot evening in Milan they carried him up onto the roof and I could look out over all the other roofs the flat top of the town,” the phrase “all the other roofs” and the word “flat” thereupon being deleted to yield the desired flatness. In other instances, as with a draft of “Indian Camp,” not just deletions, but a few false starts are highlighted, as is true of the crystalline, now-perfect story “Soldier’s Home,” in which Hemingway removed an obvious description: “then tears came out, then her eyes were red and she was crying” gives way to the simpler “she started crying.” Hemingway’s simple style has been the object of parody and imitation for nine decades, but it is plain from these pages how hard he worked at it, as stories such as the much-revised “A Canary for One” reveal; one wishes for an edition such as Harcourt made of Eliot’s Waste Land showing every single note and draft of stories such as “Big Two-Hearted River” and “A Way You’ll Never Be,” the latter presented here without emendation, as is “The Killers” and a few other of Hemingway’s best-known tales.

Essential for students of modern literature, offering insight into the mind and methods of one of the greatest practitioners of the story form.