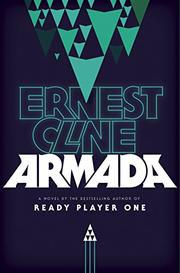 From the author of Ready Player One (2011), another book centered around video games and the 1980s.

Teenager Zack Lightman loves playing games online with his friends, although any similarities to teenagers of today end there. He’s obsessed with '80s science fiction, ostensibly because it’s a way to fill the void left by his dead father. In the attic, Zack finds not only his dad’s favorite movies on VHS, but also a detailed conspiracy theory his father wrote when he was 19, claiming video games and movies about alien invasions have been secretly funded by a shadowy organization to prepare humanity for the real thing. It’s a crazy theory that, of course, turns out to be absolutely true. When aliens invade, Zack is whisked away to a secret training facility where he learns the game he’s devoted years of his life to playing has always been an advanced tactical simulation, much like the plot to the 1984 movie The Last Starfighter. Now, Zack and his fellow gamers must step up and defend Earth for real. In the hands of a more skilled writer, the book could have drawn on familiar stories to launch into a new science-fiction adventure. Instead, it offers little more than interminable video game–style battles and timeworn tropes, including a plot twist that can be seen coming for miles. Zack’s love interest is impossibly attractive, swigs booze from an R2-D2 flask, and laughs at all his jokes—a nerd-fantasy centerfold and just as one-dimensional. Meanwhile, Zack’s two friends are indistinguishable from one another and do little more than argue over geek minutiae, because as everyone knows, that’s all nerds ever do. However, in the end, it’s the unrelenting references to '80s movies that squander any possible tension in the narrative. Readers never doubt whether the good guys will win because they’re constantly reminded: good guys always win in the movies.