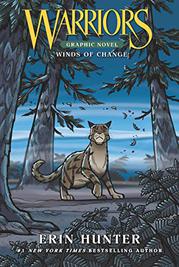 From the Warriors Graphic Novel series

In this full-color graphic adaptation of the popular Warriors series, brown tabby Mudclaw is the deputy for the WindClan, one of the many cat clans residing in a new territory uninhabited by the Twolegs. As second-in-command, Mudclaw is poised to take over for WindClan’s leader, Tallstar, but as Tallstar’s health declines, he names a different successor, known as Onewhisker, dividing the clan and angering Mudclaw. When he is approached by a cat from a neighboring clan, Mudclaw begins to worry that Onewhisker will steer the clan in a more collaborative direction, something that he vehemently opposes. Dissension grows amid the shifting dynamics, secret alliances are formed, and soon the politics have turned positively catty. An unexpected and shocking ending does not disappoint. Barry’s kinetic illustrations give a visual boost for tracking the large cast of characters, and his bright jewel tones and the cats’ expressive faces enhance the atmosphere. Jolley’s tale is extremely timely, shining a light on the dangers of political isolationism and how easily the seeds of mistrust are sowed. The intrigue runs at a four-pawed fever pitch; however, those unfamiliar with this broad and sweeping world may find themselves lost in the copious character name-drops, virtually nonexistent recaps, and series-specific lexicon.