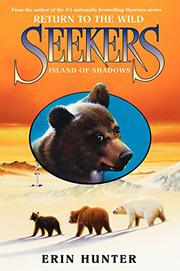 From the Seekers: Return to the Wild series, volume 1

The wildly popular writing team (writing collectively as Hunter) sends its team of bears out for another episodic adventure, but the object of this quest is less than clear.

Brown bear Toklo, black bear Lusa and white bear Kallik have accomplished the long trek to Star Island and destroyed the threats to its fragile ecosystem, but at the cost of the life of their friend, the shape-shifting Ujurak, reunited with his mother in the stars. Now accompanied by the white bear Yakone, they turn their paws homeward, unsure of both route and destination. After enduring quarrels and hunger, nearly fatal accidents and harrowing encounters with humans, the foursome stumbles across the abandoned Nanulak. Will caring for this strange bear cub fill the empty place in Toklo's heart? Or does Nanaluk conceal dangerous secrets of his own? The authors do a fine job recapping previous events, making this an accessible entry point for new readers. Unfortunately, the characters seem to have lost much of their accumulated growth and nuance as well: Toklo is angry and guilt-ridden, Lusa is wise but weak, Kallik is the nurturing peacemaker and Yakone exists mainly to be big and strong and have things explained to him. Scheming Nanaluk is a caricature of a villain, while the dreamlike visions of the ascended Ujurak only underscore the shift in theme from environmental awareness to a plea for interspecies tolerance.

Lacks the urgency and coherence of the bears' first series, but fans will demand this follow-up.