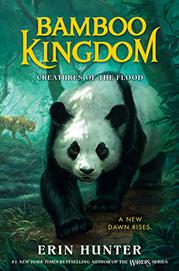 CREATURES OF THE FLOOD

From the Bamboo Kingdom series, volume 1

The first in a new series by the pseudonymous authorial collaboration, this one focusing on pandas.

In the midst of a devastating flood, a giant panda reaches the security of a cave where she can safely birth her cubs. In an initially confusing timeline, the tale then takes up much later with Leaf, who is maturing among a group of pandas in a barren countryside. On the other side of an uncrossable river, Rain, another intrepid panda, is growing up in the Southern Forest, where more previously solitary pandas have gathered. When Sunset Deepwood, the prophesying Dragon Speaker, returns—seemingly from the dead—Rain is immediately suspicious of his behavior, especially concerning his secret meetings with antagonistic monkeys. The storyline switches between these two females and Ghost, a clumsy all-white male who has grown up with his presumed littermates under the tender care of their snow leopard mother, Winter. Although he knows he differs from the other cubs in significant ways, Ghost has no idea he’s actually a panda. After a large earthquake, Leaf comes under the care of Shadowhunter, a tiger who’s sworn to reunite triplet pandas who are destined together to become the next Dragon Speakers, setting up another entry in the series. The animals are well depicted, with clear personalities, and the challenges they face are daunting, nicely sustaining the suspense. Illustrations not seen.