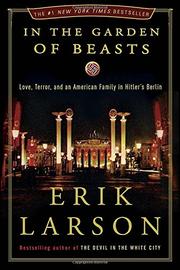 IN THE GARDEN OF BEASTS

Love, Terror, and an American Family in Hitler's Berlin

William E. Dodd, the unlikely hero of the piece, was a historian at the University of Chicago in the early 1930s, tenured and unhappy, increasingly convinced that he was cut out for greater things than proctoring exams. Franklin Roosevelt, then in his second year in office, was meanwhile having trouble filling the ambassadorship in Berlin, where the paramilitary forces of Hitler’s newly installed regime were in the habit of beating up Americans—and, it seems, American doctors in particular, one for the offense of not giving the Nazi salute when an SS parade passed by. Dodd was offered the job, and he accepted; as Larson writes, “Dodd wanted a sinecure…this despite his recognition that serving as a diplomat was not something to which his character was well suited.” It truly was not, but Dodd did yeomanlike work, pressing for American interests while letting it be known that he did not think much of the blustering Nazis—even as, the author writes, he seems to have been somewhat blind to the intensity of anti-Semitism and was casually anti-Semitic himself. More interesting than the scholarly Dodd, whom the Nazis thought of as a musty old man, was his daughter Martha, a beauty of readily apparent sexual appetite, eagerly courted by Nazis and communists alike. The intrigues in which she was caught up give Larson’s tale, already suspenseful, the feel of a John le Carré novel. The only real demerit is that the book goes on a touch too long, though it gives a detailed portrait of a time when the Nazi regime was solidifying into the evil monolith that would go to war with the world only five years later.

An excellent study, taking a tiny instant of modern history and giving it specific weight, depth and meaning.