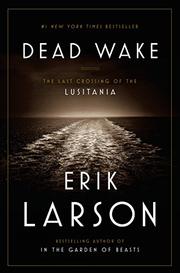 The Last Crossing of the Lusitania

Larson (In the Garden of Beasts: Love, Terror, and an American Family in Hitler's Berlin, 2011, etc.) once again demonstrates his expert researching skills and writing abilities, this time shedding light on nagging questions about the sinking of the Lusitania on May 7, 1915.

“Lucy,” as she was fondly known, was one of the “greyhounds,” ships that vied for the Blue Riband award for the fastest crossing of the Atlantic Ocean. A gem of the Cunard fleet, she drew the cream of society, and life aboard was the epitome of Edwardian luxury. The author works with a broad scope, examining the shipping business, wartime policies, the government leaders and even U-boat construction. More fascinating is his explanation of the intricacy of sailing, submerging and maneuvering a U-boat. Gaining position to fire a torpedo that has only a 60 percent chance of exploding belies the number of ships sunk. Throughout the voyage, many omens predicted disaster, especially the publication of a German warning the morning of sailing. The British Admiralty had broken the German codes and could track the whereabouts of submarines, particularly the deadly U-20. They knew that six U-boats left base during the last week of April, and three ships sank in the same channel the week before the Lusitania. The admiralty had decided to open a safer northern channel to merchant shipping but hadn’t directed the Lusitania to use it. Larson explores curiosities and a long list of what ifs: If the Lusitania had not been late in sailing, if the fog had persisted longer, if the captain hadn’t turned to starboard into the sub’s path and if that one torpedo hadn’t hit just in the right spot, the Lusitania might have arrived safely.

An intriguing, entirely engrossing investigation into a legendary disaster. Compared to Greg King and Penny Wilson’s Lusitania (2014), also publishing to coincide with the 100th anniversary of the sinking, Larson’s is the superior account.