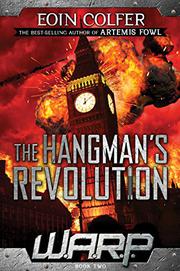 Mad Col. Clayton Box has founded a nearly worldwide ecclesiastical police state in the 19th century with 20th-century troops and weaponry transported back in time. In order to nip this in the bud, Chevie plunges once again through a wormhole into the great, filthy city’s thick miasmas and cobbled mean streets. Along with describing with indecent relish the fetid slums and sewers in which most of the action takes place, Colfer outfits Chevie with a Dickensian supporting cast. It’s led by Riley, a street child trained up as an assassin, and larger-than-life crime lord Otto Malarkey, among others. The plot consists of a quick and, usually, violent series of escapades that culminates in an assault on Box’s underground fortress. The bad guys are both clever and heavily armed, and there’s much casual murder and wading through hip-deep rivers of raw sewage, along with gunfire, massive explosions and unlikely romance. Time travel makes the future a fluid reality, but it looks like it may be saved at the end, though some strings remain to be tied up—or further tangled—in upcoming sequels. Chevie is of Shawnee lineage, leading her confederates to make the occasional, unfortunate “Injun” reference, alas. A grand yarn told with a wink and kitted out with high stakes and broadly drawn characters for maximum fun. (Science fiction. 11-14)