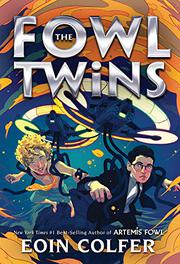 From the Fowl Twins series, volume 1

With their big brother Artemis off to Mars, 11-year-old twins Myles and Beckett are swept up in a brangle with murderous humans and even more dangerous magical creatures.

Unsurprisingly, the fraternal Irish twins ultimately prove equal to the challenge—albeit with help from, Colfer as omniscient narrator admits early on, a “hugely improbable finale.” Following the coincidental arrival on their island estate of two denizens of the subterranean fairy realm in the persons of a tiny but fearsome troll and a “hybrid” pixie-elf, or “pixel,” police trainee, the youngest Fowls immediately find themselves in the sights of both Lord Teddy Bleedham-Drye, a ruthless aristocrat out to bag said troll for its immorality-conferring venom, and Sister Jeronima Gonzalez-Ramos de Zárate, black-ops “nunterrogation” and knife specialist for ACRONYM, an intergovernmental fairy-monitoring organization. Amid the ensuing whirl of captures, escapes, trickery, treachery, and gunfire (none of which proves fatal…or at least not permanently), the twins leverage their complementary differences to foil and exasperate both foes: Myles being an Artemis mini-me who has dressed in black suits since infancy and loves coming up with and then “Fowlsplaining” his genius-level schemes; and Beckett, ever eager to plunge into reckless action and nearly nonverbal in English but with an extraordinary gift for nonhuman tongues. In the end they emerge triumphant, though threatened with mind wipe if they ever interfere in fairy affairs again. Yeah, right. Human characters seem to be default white; “hybrid” is used to describe nonhuman characters of mixed heritage.

Like its bestselling progenitors, a nonstop spinoff afroth with high tech, spectacular magic, and silly business.