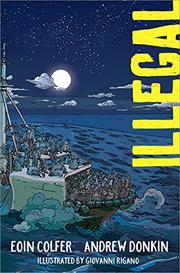 Ebo is known across his village for his beautiful singing voice, but will his voice keep him safe in his journey to the shores of Europe?

Readers follow the flight of Ebo, a Ghanaian refugee child, to Europe to find the siblings who fled before him. Ebo’s journey takes him across the scorching heat of the Sahara and through the streets of Tripoli, where he works to raise funds for passage across the Mediterranean. All the while, Ebo and the companions he meets along the way must elude the watchful eyes of the authorities who are constantly on alert for refugees. But after Ebo finally saves enough money and secures a seat on a boat crossing to Greece, he finds himself on the brink of death. Like all the others, it is too crowded; the engine is broken; and the fuel is slowly running out. Authors and illustrator take readers back and forth through time, building suspense as Ebo’s story of survival unfolds. The format allows sensitive and difficult topics such as murder, death, and horrific, traumatizing conditions to unfold for children, Ebo’s reactions speaking volumes and dramatic perspectives giving a sense of scope. A creators’ note provides factual context, and an appendix offers an Eritrean refugee’s minimemoir in graphic form.

Action-filled and engaging but considerate of both topic and audience, Ebo’s story effectively paints a picture of a child refugee’s struggle in a world crisscrossed by hostile borders.