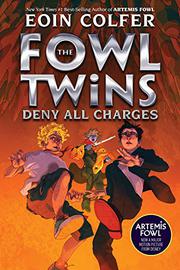 From the Fowl Twins series, volume 2

A scheme to inveigle Artemis Fowl’s younger sibs into helping steal a huge trove of gold doesn’t go at all well for the schemers.

Introduced in Fowl Twins (2019), 12-year-olds Myles and Beckett kick off their second round of exploits, dealing in midair with a guided missile to which their hybrid pixie-elf chaperone Lazuli Heitz has been strapped, then go through a series of equally ridiculous captures and rescues to several showdowns with bad guys, saving not only tons of gold, but thousands of Irish teens at a flash convention from the vengeance of a maddened, human-hating warrior dwarf. How, you ask? By employing a unique skein of complementary abilities: Myles, as dapper and at least as egotistic as his older brother, brings the mental wattage, and Beckett supplies the clever hands, unexcelled martial prowess, and a gift of tongues that extends to animals and plants. Along an improbably daft plotline that even the seldom-reflective Beckett finds “fart-centric,” Colfer also strings dazzling displays of high tech, heartwarming peeks at the family dynamics of the closely knit if decidedly eccentric Fowl clan, dolphin-back rides, huge blobs of slime (some of it explosive), and a climactic exhibition of prejudice gone off the rails that is intense enough to leave readers queasy. As a teaser for future adventures, Lord Teddy Bleedham-Drye, arch archvillain from the previous volume, pops up for a cameo at the close. The human cast presents as White.