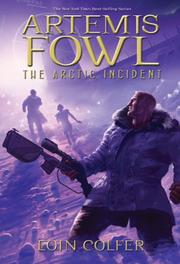 In this sequel to Artemis Fowl (2001), the intellectual brilliance and total lack of scruples of the eponymous hero have enabled him to use his father’s criminal empire to accumulate a vast fortune. Artemis utilizes this money to finance the search for his father, still missing two years after a disastrous and almost legitimate foray into Russia. Upon the receipt of an e-mailed picture, supposedly of his father, Artemis and his bodyguard, Butler, start the journey to Russia, only to be abducted by an old adversary Captain Holly Short, of the fairy police, LEPrecon. Holly and her commander erroneously suspect Artemis of masterminding a smuggling ring. The deal Artemis and Butler make with the LEPrecon officers (Artemis lends his brain to solve the smuggling puzzle; LEPrecon lends its advanced technology to the search for Fowl, Senior) leads to a series of major and minor disasters, which provide suspense and tension to this well-plotted story. Characterization is slight but amusing: Holly Short, first female captain in the LEPrecon is a feisty but warmhearted fairy, Foaly the centaur head of LEPrecon’s technology department is brilliant if irascible, and the dwarf, Mulch, is hilarious, full of himself and of dwarf gas—don’t ask. Filled with puns, word plays, and inventive new concepts about the fairy realm, this mix of fantasy and science fiction will delight fans and make converts of new readers. An exhilarating Celtic caper that stands very nicely indeed on its own merits. (Fiction. 11-14)