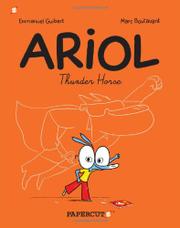 From the Ariol series, volume 2

More mild mischief from a bookish donkey and his porcine best bud.

The book begins with a tongue-in-cheek quest to complete his collection of beloved superhero Thunder Horse stickers with the elusive #128 (“I bought four packs yesterday. That’s too much. I have to get down to one pack a day”) and ends with Ariol in such rapturous absorption in the new Thunder Horse novel that he misses favorite bookstore owner Mr. Begossian being taken away in an ambulance. Other high and low spots in Ariol’s life range from an embarrassing but informative show and tell of his sonograms at school to a satisfying bit of flirting with classmate Petula. These and other experiences, such as fretting over a scheduled booster shot and taking a long train ride with his hyperactive friend Ramono, provide opportunities aplenty for irritating grown-ups, exchanging banter and suffering comical mishaps. Small of stature but depicted with wide eyes magnified by outsized glasses, Ariol is easy to spot among the diverse, all-animal cast populating Boutavant’s spacious, cleanly drawn cartoon panels.