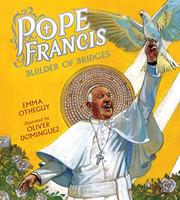 Otheguy presents a succinct chronicle of Pope Francis’ trajectory from his childhood in Buenos Aires to his papacy in Rome.

Straightforward storytelling reveals Jorge Bergoglio as a prayerful boy who loved soccer and learned about the goodness of all people from his grandma Rosa. As an adult, he became a Jesuit priest as part of his search to help people and eventually became the first South American and Jesuit pope in 2013. Otheguy successfully weaves Catholic concepts into the historical narrative, such as the election process for a new pope, and defines such potentially unfamiliar terms as “pontiff” while she underscores his care for prisoners, refugees, the planet, and children. Extensive backmatter, including a moving and personal author’s note and citations for the primary source quotations, elevates the historical content further. While the book succeeds in narration, it struggles in illustration. Depictions of Pope Francis are strong and realistic, but supporting characters, such as the cardinals, lack refinement. The book’s design is predictable: one or more paragraphs of text paired with Dominguez’s literal illustrations in acrylic, gouache, watercolor, ink, and pastel that bleed across the gutter. The overuse of jagged lines to represent sounds (think: ZAP! and POW! from 1960s TV Batman) is slightly tiresome; the figures’ gestures are enough to connote action. In spite of the shortfalls in illustration, this is an uplifting and solidly researched book about a significant world leader.

It’s not perfect, but it deserves solid consideration.