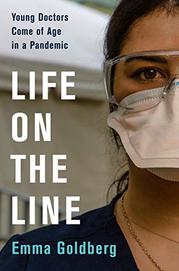 LIFE ON THE LINE

Young Doctors Come of Age in a Pandemic

A moving account of six medical students who graduated early in order to join the battle against Covid-19.

New York Times journalist Goldberg sets her scene close to home at Bellevue Hospital and Montefiore Medical Center, both of which were already understaffed and overwhelmed in April 2020. Medical schools teach essentials during the first three years; the fourth is generally elective, so leaving early is an option, and all New York City medical schools asked for volunteers during the pandemic. Not everyone stepped up, but the author offers appreciative profiles of those who did. Readers who hear that Covid-19 kills only a small percentage of its victims, comparable to the flu, will be shocked at the horrific suffering that her young doctors witnessed. Entering through the respiratory tract, the virus attacks the lungs, often leading to pneumonia and respiratory failure so severe that patients require a ventilator. However, early on, half of patients placed on a ventilator died. “Another challenge for the new doctors,” writes Goldberg, “was the pervasive fear of infection. For the most part, neither senior physicians nor new graduates had been trained to worry for their lives while caring for patients.” All struggled to establish trust while spending minimal time near patients and wearing bulky protective equipment that covered their faces. Although Goldberg’s subjects seem to be the crème de la crème of the medical profession, she digresses liberally into the establishment’s shortcomings. “American medical schools are still predominantly white and wealthy,” she writes. “This is partly because doctors are predominantly white and wealthy, and doctors tend to beget doctors.” White doctors spend more time with White than non-White patients, but Covid-19 kills far more poor and non-White victims, which is sadly true for most diseases. Goldberg concludes that the medical establishment is making a genuine effort to broaden medical culture and attract minorities, and her heroes, an admirably diverse group, are contributing mightily.

An inspiring story of a group of young doctors who endured a trial by fire.