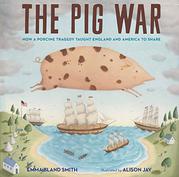 How a Porcine Tragedy Taught England and America To Share

“This is a true tale about two mighty nations, an ill-fated pig, and a most unusual war. It is also a story about sharing.”

That opening, in black, sans-serif lettering, is followed by further text that’s broken up by red-inked headings for date, setting, characters, and mood. Continuing a jaunty, lighthearted tone that proceeds throughout the text, it informs readers that the mood is “About to change, for the worse.” The verso sports an antique-looking map of the Western Hemisphere with a detail of San Juan—a Pacific Northwest coast island of, in 1859, ambiguous provenance inhabited both by British employees of the Hudson’s Bay Company and a few American settlers. (The original, Indigenous residents are relegated to a parenthetical mention in the author’s note and figure not at all in the story.) As the story begins, an American named Lyman Cutlar angrily kills Brit Charles Griffin’s pig as it eats from Cutlar’s potato patch. Cutlar apologizes and offers to pay for the pig but then refuses to pay Griffin’s exorbitant asking price. Enter authorities from both nations in an escalation that eventually involves scores of warships. When war seems inevitable, Gen. Winfield Scott is sent by President James Buchanan to mediate. The text is true to its introduction, and it also pursues the idea that hotheadedness leads to disastrous consequences. Vocabulary, verbosity, and content suit this for older elementary, independent readers. The storytelling goes a bit flat at the end, when Cutlar is mentioned but not Griffin. Colorful, stylized art against apparently distressed surfaces is an impeccable complement. (This book was reviewed digitally with 10-by-20-inch double-page spreads viewed at 42.6% of actual size.)