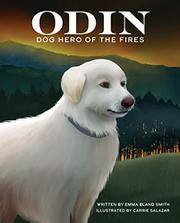 ODIN, DOG HERO OF THE FIRES

A resourceful ranch dog protects a herd of goats during a wildfire in Northern California.

A Great Pyrenees dog named Odin narrates this dramatic story based on true events. The dog relates the harrowing tale in first-person present tense, adding dramatic suspense as the plot unfolds. As a fast-moving wildfire approaches, the two owners of a ranch decide to flee. They leave in their truck with only one of their dogs after Odin refuses to get in. He stays behind with a herd of eight young goats, saving their lives by leading them to the shelter of some boulders on a hill. When one of the dog’s owners returns the next day, he finds Odin, all the goats, and two fawns safe near the rocks, though the farmhouse and barn have been burned to the ground. The illustrations are uncompelling in execution and composition, with the animals often portrayed in static poses. The scenes of the nighttime fire and the hazy, gray day that follows, however, project a dreamlike effect that in combination with the posed animals conveys the nightmarish quality of the wildfire and its aftermath. An author’s note describes the owners of the ranch, who present white, and the circumstances of the actual fire. A final page gives information about Great Pyrenees dogs.

An entertaining story of a dog’s brave behavior in a devastating wildfire.