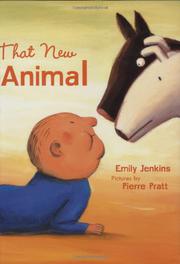 Fudge Fudge and Marshmallow do not like the new animal, not one bit. Their people stop throwing sticks and tossing balls to the two dogs just so they can sit and look at the new animal, even kissing “it” when it cries. The dogs consider eating it, burying it, and sleeping on top of it in the cradle; then, someone else arrives, called Grandpa. Just like the new animal, he smells differently from dogs, but when he tries to pick “it” up, the dogs bark loudly; after all, it’s not his new animal, it’s theirs, “to hate as much as want to.” As the new animal (a baby, of course) crawls its way into the dogs’ hearts, they realize they can like “it” just a bit after all. Pratt quirkily illustrates the droll canine point of view with thickly colored, soft-edged broad strokes. The elongated humans reflect canine perspective and doughish-shaped heads while spare facial lines comically express canine and baby reactions. These two will fetch delight in Jenkins’s clever take on new arrivals. (Picture book. 4-8)