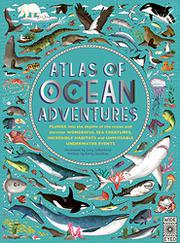 A Collection of Natural Wonders, Marine Marvels and Undersea Antics From Across the Globe

A globe-spanning gallery of marine life in panoramic settings ranging from the rocky nesting sites of seabirds to the depths of the Marianas Trench.

Hawkins and Letherland (Atlas of Dinosaur Adventures, 2017, etc.) include stops in Arctic and other northerly waters but largely focus on named locales in the Pacific and the Southern Hemisphere. Painted views of a sperm whale and a colossal squid going tooth to tentacle in the Ross Sea or a teeming shoal of hammerhead sharks swirling around a Cocos Island seamount supply visual drama while undulating lines of accompanying captions offer generous dollops of the verbal sort: “The lionfish gets a taste of its own medicine as the Bobbit worm injects a paralyzing toxin. Dinner is served.” Here brightly colored sea dragons and other tropical fish dart through equally picturesque reefs, there blue-footed boobies and crimson Sally Lightfoot crabs (both “nifty little movers”) strut their stuff ashore. As if there weren’t natural business enough to provide an engrossing turmoil, sharp-eyed viewers will spot goggles on a leatherback turtle, a Magellanic penguin poised on a diving board, and other tongue-in-cheek tweaks. Periodic mentions of the dangers of floating plastic and other pollution add an undercurrent that surfaces at the end in a spread titled “Oceans in Danger.” Otherwise, aside from the occasional boat, humans and their works are absent.

An immersive tour of oceanic realms.