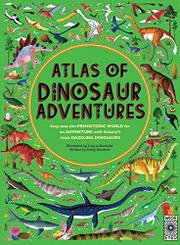 Step Into a Prehistoric World

A world tour of reconstructed prehistoric landscapes based on modern fossil discoveries.

Going continent by (modern) continent in a series of big, populous maps and full-spread scenes, Hawkins and Letherland feature 31 dinosaurs or prehistoric reptiles but add dozens of others—all identified, supplied with quick descriptive notes, and depicted in a simplified but reasonably realistic style. This adds up to a weighty bundle of names and facts, but the authors compensate by not taking their enterprise too seriously. Readers won’t soon forget, for instance, that the “massive droppings” of T. Rex “were as long as a human arm,” and sharp-eyed viewers will notice a Ceratosaurus carrying a butterfly net to bag prey, both a toothy T. Rex and a Giganotosaurus with napkins tied around their necks, and smaller hunters sporting the odd pith helmet or kerchief. Also, there is a certain cognitive dissonance between the writer’s grisly references to predators attacking a corpse in a “group rip with steak-knife teeth” or exclamations of “Crunch, crunch, shark for lunch!” and visuals in which predators and prey pose without making actual contact and there is no visible blood or gore. A catastrophic meteorite (with proper references to the contemporaneous volcanism) brings both the era and the tour to a close.