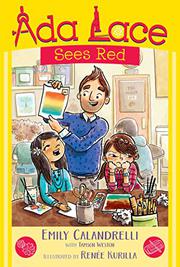 From the Ada Lace series, volume 2

by Emily Calandrelli with Tamson Weston ; illustrated by Renée Kurilla

Inventor-in-training Ada Lace discovers that not everyone sees the world as she does.

In this second episode of a STEM-focused chapter-book series, third-grader Ada has a problem. She can’t do the art assignments involving techniques that use color. Worse, the school art teacher is her father. Failing in school is bad enough; disappointing her artistic parents is worse. Unlike her parents and her good friend Nina, Ada’s strengths lie in science and technology. She’s been constructing a robot she’s named George. Kindly Mr. Peebles, an inventor living nearby, offers help and encouragement. Ada’s art problem is a good robotics challenge. Using photoresistors, Ada gives George the capacity to paint paintings for her school assignments and for the audience at an under-12 robotics competition. Meanwhile, seeing that Ada has difficulty distinguishing different color shades, Nina helps her figure out why. Ada and her parents are all relieved to have an explanation for her uncharacteristic school difficulties. Illustrations portray Ada and her family as white, Nina as Southeast Asian, and Mr. Peebles as black. Ada’s self-portrait, an important plot point, looks quite different in Kurilla’s illustration from what’s described in the text, but readers will be drawn in by Ada’s real issues and satisfied by the resolution.