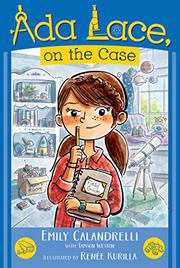 ADA LACE, ON THE CASE

From the Ada Lace series, volume 1

Using science and technology, third-grader Ada Lace kicks off her new series by solving a mystery even with her leg in a cast.

Temporarily housebound after a badly executed bungee jump, Ada uses binoculars to document the ecosystem of her new neighborhood in San Francisco. She records her observations in a field journal, a project that intrigues new friend Nina, who lives nearby. When they see that Ms. Reed’s dog, Marguerite, is missing, they leap to the conclusion that it has been stolen. Nina does the legwork and Ada provides the technology for their search for the dognapper. Story-crafting takes a back seat to scene-setting in this series kickoff that introduces the major players. As part of the series formula, science topics and gadgetry are integrated into the stories and further explained in a “Behind the Science” afterword. This installment incorporates drones, a wireless camera, gecko gloves, and the Turing test as well as the concept of an ecosystem. There are no ethnic indicators in the text, but the illustrations reveal that Ada, her family, and bratty neighbor Milton are white; Nina appears to be Southeast Asian; and Mr. Peebles, an inventor who lives nearby, is black.

The story feels a bit contrived, but Ada will be a welcome addition to the small circle of science-loving girls in the chapter-book world.