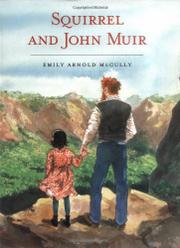 Caldecott Medalist McCully again successfully creates a narrative that pairs a rambunctious girl character with a fascinating historical figure. This inventive tale brings the personage of naturalist John Muir to life. In 1868, James Hutchings began a tourist business in the beautiful Yosemite Valley in 1868, and his daughter Floy was the first white child born in the valley. At six, her wild behavior of tearing around the valley, balancing on the woodpile plank, and capturing frogs earned her the nickname Squirrel. When John Muir arrived at Hutchings’s hotel seeking both work and knowledge about the natural world, Floy became his shadow, entranced by the wonders of nature that he showed her. The ending has Muir moving on but sharing his special place in the mountains, with her. McCully’s familiar watercolors beautifully capture the scenery while the simple text conveys the bond between the unlikely pair. A two-page author’s note provides historical background (Floy died tragically). A lovely tribute to the gentle genius of the Sierras that gives dimension to the man and respect to his name. (bibliography) (Picture book/historical fiction. 5-8)