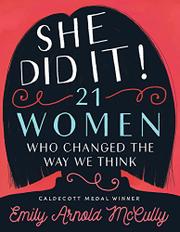 21 Women Who Changed the Way We Think

Beginning with the subject of her earlier biography Ida M. Tarbell (2014), McCully uses a chronological (by birth year) structure to organize her diverse array of subjects, each of whom is allotted approximately 10 pages. Lovely design enhances the text with a full-color portrait of each woman and small additional illustrations in the author/illustrator’s traditional style, plenty of white space, and spare use of dynamic colors. This survey provides greater depth than most, but even so, some topics go troublingly uncontextualized to the point of reinforcing stereotype: “In slavery, Black women had been punished for trying to improve their appearance. Now that they were free, many cared a great deal about grooming”; “President Roosevelt ordered all Japanese Americans on the West Coast to report to internment camps to keep them from providing aid to the enemy Japanese forces.” Of the 21 surveyed, one Japanese-American woman (Patsy Mink) is highlighted, as are one Latinx woman (Dolores Huerta), one Mohegan woman (Gladys Tantaquidgeon), three black women (Madam C.J. Walker, Ella Baker, and Shirley Chisholm), four out queer white women (Billie Jean King, Barbara Gittings, Jane Addams, and Isadora Duncan; the latter two’s sexualities are not discussed), two Jewish women (Gertrude Berg and Vera Rubin), and three women with known disabilities (Addams, Dorothea Lange, and Temple Grandin).

Despite its not insignificant flaws, this book provides insights into the lives of important women, many of whom have otherwise yet to be featured in nonfiction for young readers.