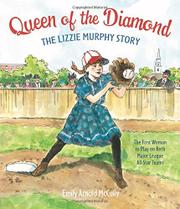 QUEEN OF THE DIAMOND

A very determined girl in turn-of-the-20th-century Rhode Island decides that she will play baseball.

Lizzie’s brother, Henry, plays on local amateur teams, and Lizzie wants to play as well. When she plays catch with Henry, she throws strong and true. Her father and brother both support her, although her mother wishes a more normal, expected future for the girl. When she is 8, she wangles a place on the team as a batboy. At a game against a rival town, she is the only one who remembers to bring a ball and talks her way into playing first base. Through insults and jeers, she plays well on the field and at bat, earning everyone’s respect. At 12, Lizzie begins work in the mill alongside her family; she plays and excels at other sports, but baseball is her special love. Later she continues to defy expectations regarding a woman’s place, joining semipro teams, playing for many years and always demanding her fair pay. McCully does not make comparisons to modern-day professional baseball, carefully keeping the tale true to the time period, but she obviously admires the daring young woman who paved her own path. The syntax is modern but with a hint of old-fashioned cadence. Bright, light-filled, expressive illustrations complement the action beautifully.

Readers will root for Lizzie all the way.