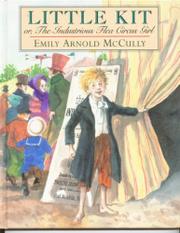 or, The Industrious Flea Circus Girl

Little Kit is at first delighted to be mistaken for a boy and given work with a flea circus. An orphan in 19th-century London, her prospects have never been brighter. But she soon discovers that the delightful performing fleas are prisoners, just as she is, to the evil Professor Malefetta. She exists on gruel and crusts until they travel to the country, where she becomes friends with Nell Derry. While Kit is bathing one night, a pickpocket discovers her secret; she runs to the Derry home where she is taken in as one of their own. This is an atmospheric tale that suffers from a sweeping effort to comment on several aspects of Victorian London at once. Child labor, fleas' rights, city squalor vs. country hygiene—all are enmeshed in a plot resolved simplistically and fast. (Picture book. 6-8)