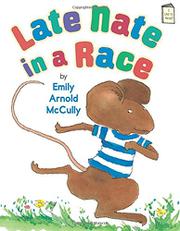 LATE NATE IN A RACE

McCully’s beginning reader demonstrates that it takes more than words to make a story.

This is a tale of good intentions. Both the artwork, with its wobbly pen lines and disarming characterizations, and a measure of the wordplay speak volumes about welcoming new readers. The words are accessible, the rhymes provide flow and the near-rhymes—“‘Eat up, Nate,’ say Jane and Jake”—are one of those little delights that snag the reader’s ear. But there is also atonality reminiscent of Dick, Jane and Sally. “The race is today. Mom, Dad, Jake, and Jane are here. Nate is not. He is slow. / It is late. Nate is still not here.” Storywise, okay, Nate the mouse is slow, and so be it. He even has a Thoreauvian moment when, as his mother prods him to enter the race, he says, “No. I like to go slow.” But he is never allowed to beat that drum, as his mother pushes him to the starting line. Nate, who has shown not a wink of flash, blows by everyone and wins the race by yards. What gives? Did a cat unexpectedly enter the precincts? Did fear give him sudden instincts of skill? Was it steroids? No reason is forthcoming.

Once readers have tackled the words, this story deflates with alarming celerity.