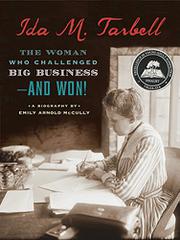 A female journalist takes on the behemoth Standard Oil and its powerful founder, John D. Rockefeller, changing both reporting and business regulation.

In the period just before and after the Civil War, the nascent petroleum industry grew unchecked by regulations or ethical business practices, and women had few options outside of marriage and family. These two factors come together in the life of Ida M. Tarbell. Daughter of an early oil entrepreneur, Ida and her parents decided she should receive a solid education. Rejecting the traditional roles available to women, she embarked on a career as a journalist and writer. Eventually she made her name as a fearless investigative reporter, exposing the corrupt practices of John D. Rockefeller and Standard Oil. In a startling departure, Caldecott winner McCully offers a thorough prose exploration of the life of a complex woman who defied the conventions of her time while coping with her own family difficulties, successfully contextualizing her work against its historical backdrop. The shift from picture-book form to long-form nonfiction is not without its bumps; the detailed narrative moves slowly as it describes project after journalistic project, and the archival images McCully includes do not sufficiently break up the text.

Though Tarbell rejected the term, this will appeal primarily to those interested in the history of muckraking journalism.