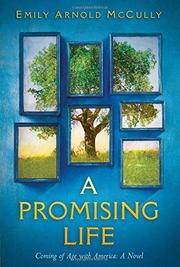 Coming of Age with America

Jean Baptiste Charbonneau was born to a Frenchman, Toussaint, and a Shoshone woman, Sakakawea, who assisted Lewis and Clark on their legendary expedition.

When Sakakawea’s husband’s post-expedition plans fall through, they decide to leave St. Louis behind, leaving their only son in the nominal care of Capt. Clark, who had offered to adopt the boy. Problem is, Capt. Clark is hundreds of miles away, and Jean is left to attend an all-boys school of “mixed bloods”—children of Native and white parentage. Jean adapts. When Capt. Clark finally makes it back to St. Louis, Jean learns that his place as Clark’s “son” has been taken by Clark’s natural-born newborn son. Though Clark continues to financially support Jean’s education, Jean is left to grow up on his own and becomes further immersed in “white” ways. This narrative distances readers from the harshness of life for Native American children who were forced to attend missionary schools. McCully creates a fictionalized character who interacts with apologetic yet complicit racists, including Clark himself, a slave owner who contributed to the western expansion that destroyed Native American nations. Sakakawea’s voice is muted as she permanently leaves her 7-year-old son behind, only wishing the young child well in his adaptation to the white world. The depth of Sakakawea’s experience is lost, her depiction merely that of a passive captive who lacks any real emotion.

A slow read with an emphasis placed on the “benefits” of Jean’s Christianized education and a focus that glosses over the genocide that occurred among Native American people.