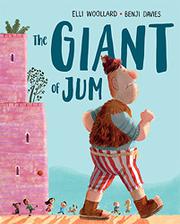 THE GIANT OF JUM

An oversized gourmand with a penchant for little children has a change of heart (and stomach).

Who could blame the Giant of Jum for eyeing his daily fare of broccoli with more than a modicum of distaste? Inspired by “Jack and the Beanstalk” (and conveniently forgetting the ending), the giant sets out to fill his tum with tots. Yet each time he encounters potential prey, they end up getting him to help them fetch their ball, save their cat from a tree, and so on. When he finally meets a boy named Jack, his proclamation that he intends to devour the lad is met with skepticism on the part of the other kids. They hand over a massive cake they’ve special ordered for him in thanks, and the giant comes away with the undeniable realization that “Chocolate’s much better than children!” The cadence of the lines dances on the pages, perfectly playing off the old “Fee Fi Fo Fum” rhymes with eloquence and aplomb. Fully embracing the spirit of the enterprise, Davies has a great deal of fun with the images, filling their corners with animals hiding not-so-cleverly from the perpetually hungry ogre. The giant himself never crosses over into the truly scary; he is depicted as a gargantuan white man with a house for a hat. The children are a multiracial crew.