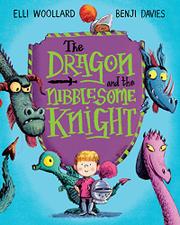 THE DRAGON AND THE NIBBLESOME KNIGHT

A bit of a mix-up results in an unlikely friendship.

The rhyming text opens the story on a young dragon named Dram who is sent out into the world to capture and eat his first “nibblesome knight.” The big-eyed, small, green dragon doesn’t appear frightening at all and looks downright vulnerable when he crash-lands in a pond after bad weather strikes during his flight to hunt down a knight. A knight who is a blond, white boy named James witnesses the little dragon’s fall, takes off his armor, and wades into the water to rescue Dram. He’s never seen a dragon before and thinks Dram must be a duck of some sort. For his part, Dram doesn’t recognize James as a knight and thinks he’s just “a lad.” Nurturing, empathetic James feeds and cares for Dram until he’s well enough to go off on his own. When the pair meet up again on the castle grounds, James is wearing his armor and wielding a sword, and they recognize each other’s true identities. There’s a brief moment of tension to make readers wonder if they will do battle or not, but the gentle tone of art and text alike propel the story toward its satisfying, happily-ever-after ending. The refrain of “dribblesome, nibblesome, knobble-kneed knights” will have listeners joining in with glee.

Slay storytime (if not dragons) with this good knight book.